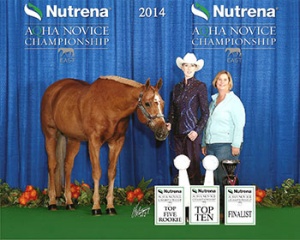 Wow, what a great year this has been! Cole is feeling good! I've always said he's had a work ethic unlike any other horse I've known, but this year was different. This year he had the drive, the want to win. He had a point to prove; he's not the old broke horse that just does his job because he's asked. He wanted to show us that regardless of age and past injuries, he can still step it up, strut his stuff, be flashy and place up there.

We had a great time at the Novice Championships East in Tennessee this year. Receiving a Finalist Medallion in HUS, Trail, Showmanship, Horsemanship, and placing 5th in Western Riding was fantastic.

Congress for us was up in the air. We signed up for it, but had a good feeling Cole would be too tired having just come from Tennessee. We were going to wait and see how he felt and decide when we got back. Boy were we surprised, after a short rest Cole was ready for more!

Our success wouldn't be possible without an exceptional trainer like Jennie Griese. I am so lucky to have a trainer like her that is as kind as she is skilled. Thank you Jennie for pushing Cole and I to higher levels and striving for our best.

A big thank you to Dr. Rob Blohowiak for maintaining Cole's overall health and keeping his body at top notch. I am amazed at his age that he is in such great shape and moving better than he has in years.

I want to thank my mom, dad, and my boyfriend Billy for their amazing support. Whether it's driving the RV, carrying heavy saddles, picking the stall, or watching me show and giving a little whistle after my pattern is done, I appreciate it all.

Thanks everyone for a great year, see you in 2014
Nicole

WQHA Board Meeting
9:00 am at LaSure's Banquet Hall, Oshkosh, WI